At home with my evening meal  I like to drink sake using “japanese folk pottery”—Nihon Rokkoyo.

A Bizen  tokkuri and a Mashiko guinomi are a fun combination.

As is Bizen and Kuo-Oribe. Bizen uses ash glaze, the tokkuri below is the father,  the one above is the son.  While using a tokkuri from one  kiln and a guinomi from another makes an interesting visual experience, its the tactile experience that is sought after. Bizen feels rough and with oribe  everytime you pick it up you  experience something new about the shape 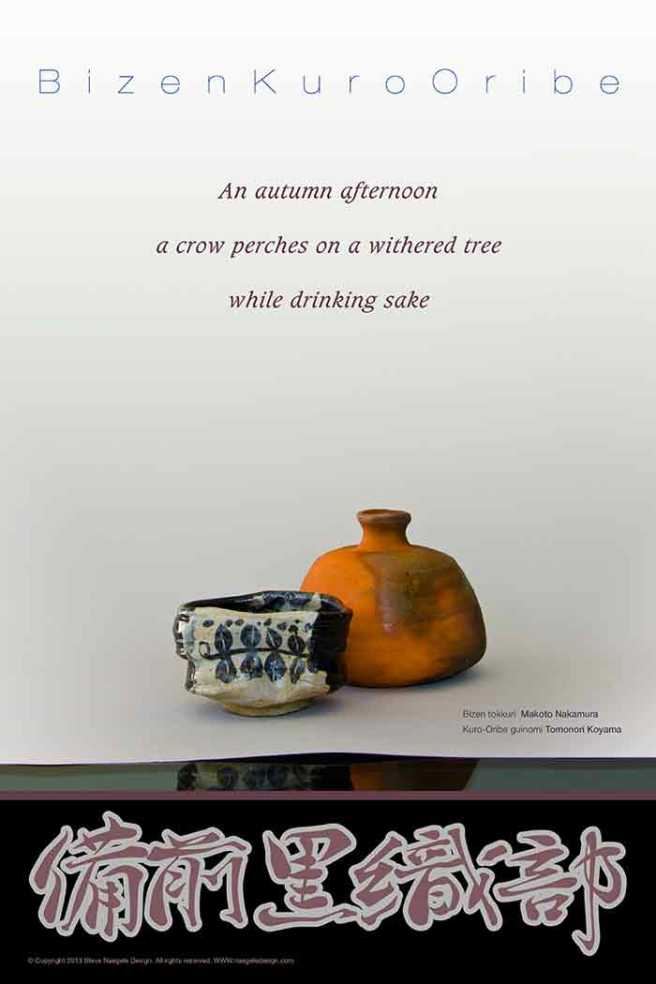 Oribe tokkuri and a Setoguro  guinomi. I prefer “functional pottery.”   Functional  pottery and more so high fire pottery was a major human creation that enable people to survive and grow. Functional pottery used everyday as basic tools of survival and thankfully great potters who made the everyday experience more meaningful  than just another tool. I do not see how something that sits in a museum where the “potter” calls himself (or herself ) an “artist because they made  something meant to not be used but to be looked and admired?”just misses the point.

But then again fake news is knowhere and you have to respond for yourself. 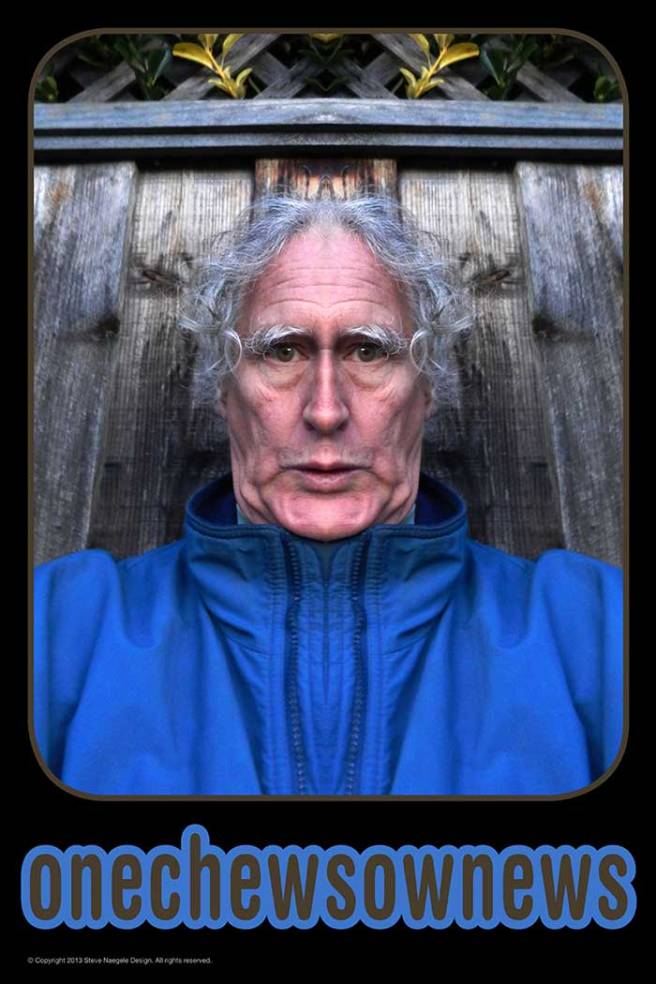 Hui-neng (惠能) was the Sixth Patriarch of Chan, he could not read or write, maybe he was not educated  into thinking he actually knew something.

Imagine before printing, a book  was written—first draft, editing , second draft, layout and design, all done at once, any editing was done in the second printing and  as they were hand printed”  the first one and the second were not the same. After printing every edition was the same, until after it was read  when it was “personalized” not by the author or published, but by the reader.  Yesterday inHalf Price Bookstore clearance section for $2 I got a copy of Frankenstein: Or The Modern  Prometheus. There was no new layout or typesetting, rather the pages of a previous early printing was photocopied. Its been many years since I read it,

“I learned that the possessions most esteemed by your fellow creatures were, high and unsullied descent united with riches. A man might be respected with only one of these advantages; but without either, he was considered , except in very rare instances ,as a vagabond and a slave, doomed to waste his powers for the profits of the chosen few! ”

After awhile or a while after, or perhaps  it was actually before, Hui-neng was lucky he was not asked to cut off his arm like Huike (大祖慧可), maybe he was not educated to mind..

For my celph , I just  try   to keep my feet on the ground

And blind my mind to line my ways

We all may start out the same but too much exposure makes each of us an individual. These are images of something we see everyday—the top of the letter “S” (in one case the bottom) in the word “STOP” painted on the street. Laws of Entropy? or nature just cannot control itself.

While  SciFi for decades  had likely included “ personal phones,” imagine viewers seeing this imaget that time, your own phone in your own car with you wherever you go, I guess he missed about being able put it in your pocket. I can remember using a phone like this in farm residences  when I was young.

An image in architecture (a Greek or a Roman??)  reading a book, Over past 15 years  sales of printed  books have channeled in about a 15% range but its likely that e-books are increasingly read.  People’s perception of books preprint as compared to post-print is an interesting subject. 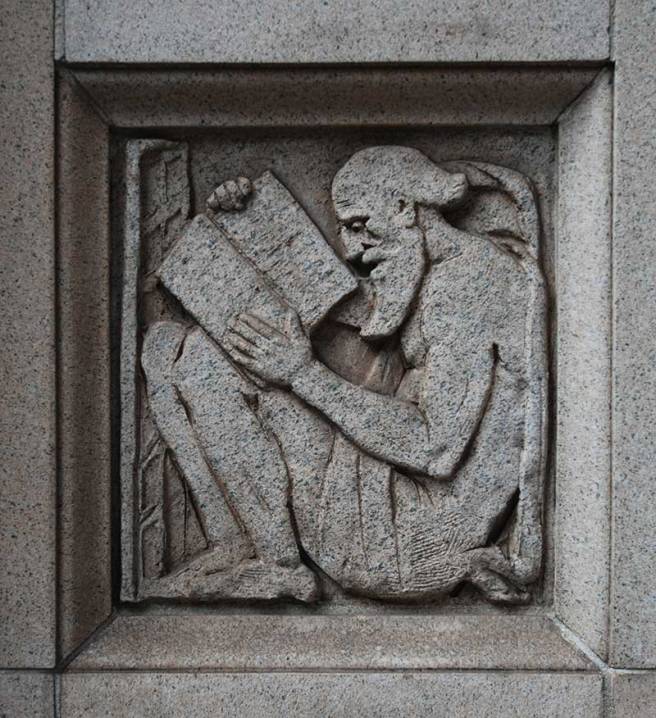 Pre-print: Here is this thing you see it as a depository for precious information, where each book is a unique experience, even the “ same book” is hand written and different. Each “publication” of a specific book is going to bedifferent. How “organized” can  the layout and writing be?

What in post print is a first draft is the product in pre print.

Preprint: Who cares about how many pages or what size? The writer sits down, writes and however many pages it takes is the final product—  first draft layout,  writing and basic organization are all  done at once  during  production

Post-print: The construction requires the content to fit precisely in a specific number of pages at a specific size. Every thing  must be organized and planned before starting production. Print brought the common use of organization, linear thinking,  the increase of the importance of the visual experience and decreased the role of other sensual experiences.

I could not quite understand this guy’s conspiracy theory, and as I listened to him explain it, it became increasingly obvious he did not understand it either. It was not in a logical order. Post Print, A logical order becomes  necessary for communication AND it also increases the amount of information  which  can be communicated.

Deviant behaviour, to a degree becomes defined  by  how well people can adjust/ adapt  to an artifical reality while living in a  real life experience of  of chaos.

Leo Laporte, Steve Jobs—computers! I get it ;

Isko Moreno?  I think  he is a rock star  who became mayor of Manila;

and Mr Aramaic?? I think of Gene Scott explaining  his chalkboards of  the same Bible  verses in different languages. 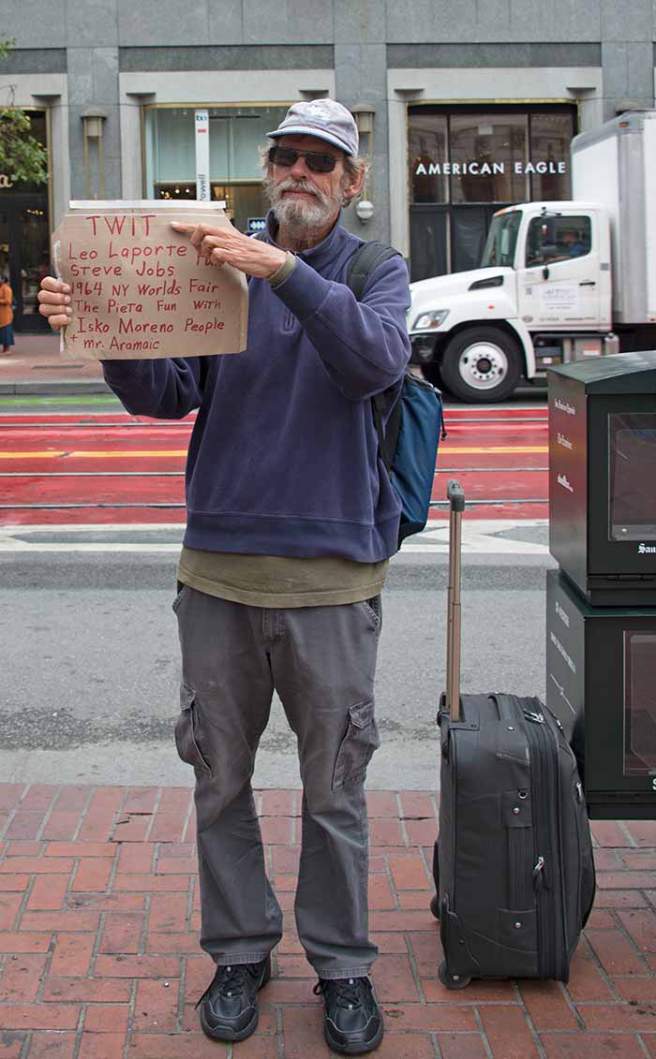 People as they are on the street, it does not have to mean anything, no subtle implications, no profound insight into social injustice or individual motivations, just people living.

Reflections and reality, what is the meaning of human experience?  Who owns it? Who decides what it means, who decides how it should feel?

How does this little corner of the world  compare to the pyramids? ; Or a hunter in the woods who sees a sign of a kill for food for his family?; A 16th century marine pilot finding the North Star;  Seeing bats fly out of the Carlsbad Caverns;  holding your new born child — we all have a right to these experiences . . .

“Blockchain money” may well be the enemy of the nation state, the enemy of the demagogues who preach hate, fear, racial superiority and national sovereignty and use their tax payer funded standing armies to make war on other human beings.

We do not need any more reasons to kill other human beings, we have far too many already.

You might think I was ready for school days. I had ADD then, worse now and teachers thought I was just a hack off, then  or maybe I was a hackoff  then and teachers tried to help me and  I did not realize I should learn more than I did . . .

“When I use a word,” Humpty Dumpty said, in rather a scornful tone, “it means just what I choose it to mean—neither more nor less.”

“The question is,” said Alice, “whether you can make words mean so many different things.”

“The question is,” said Humpty Dumpty, “which is to be master—that’s all.” 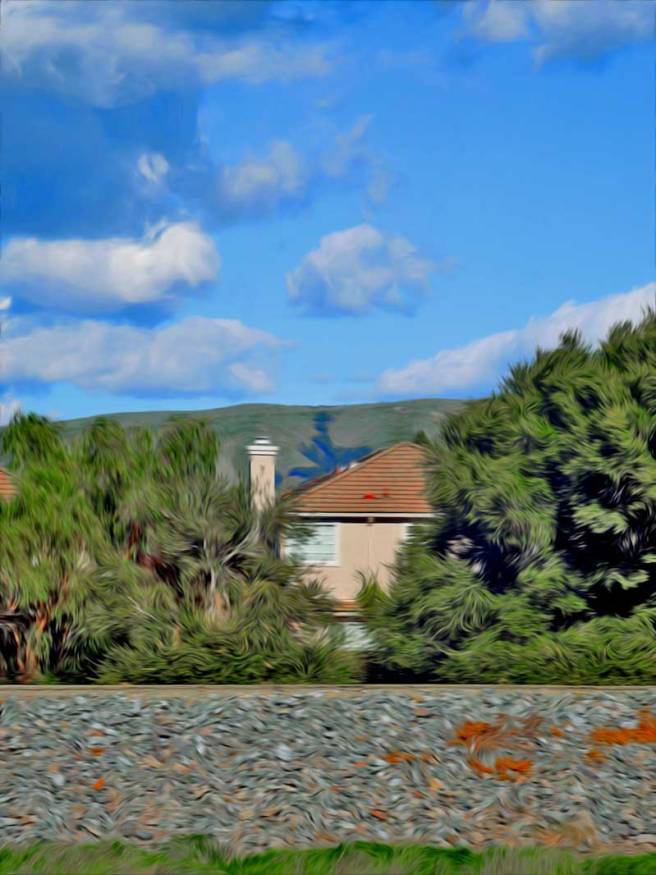 And the masters make the rules for the wisemen and the fools
but its all right ma, I’m only me.
(apologies to BD) .

So now give me a reason, any reason will do,

Its nothin’, just somethin’  my aunt left me one day when I was hungry,  its so far away the older I get the easier it is to remember to forget.

Life’s little moments, windows into some kind of  questionable  misunderstandings that were never fixed, those  things I should’ve have done,  I could’ve done,  I would’ve done if only you had been there.

The light that shines darkens my corners, still, 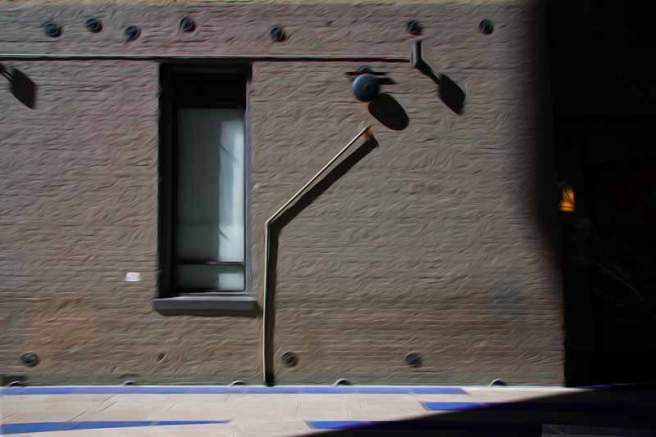 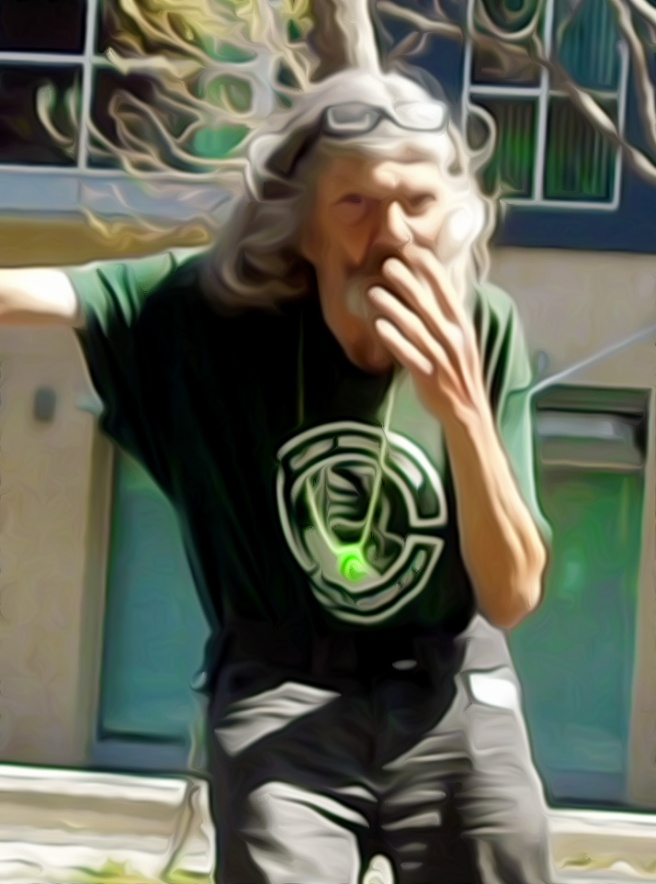 Keeping my feets on the ground.

Nor was I sleeping when I missed it all

People thought they had found me when I fooled them,

While others thought they had fooled me when I found them 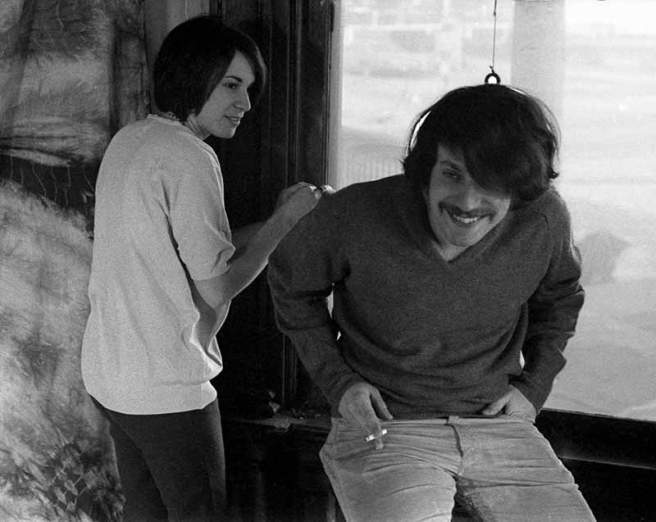 Something I new then and only yesterday know now,
it only brought me loneliness.
But I could not do anything else but stand outside, alone, maybe my camera was there I still do not no,  while others found they’re own happiness in a room which had no door.