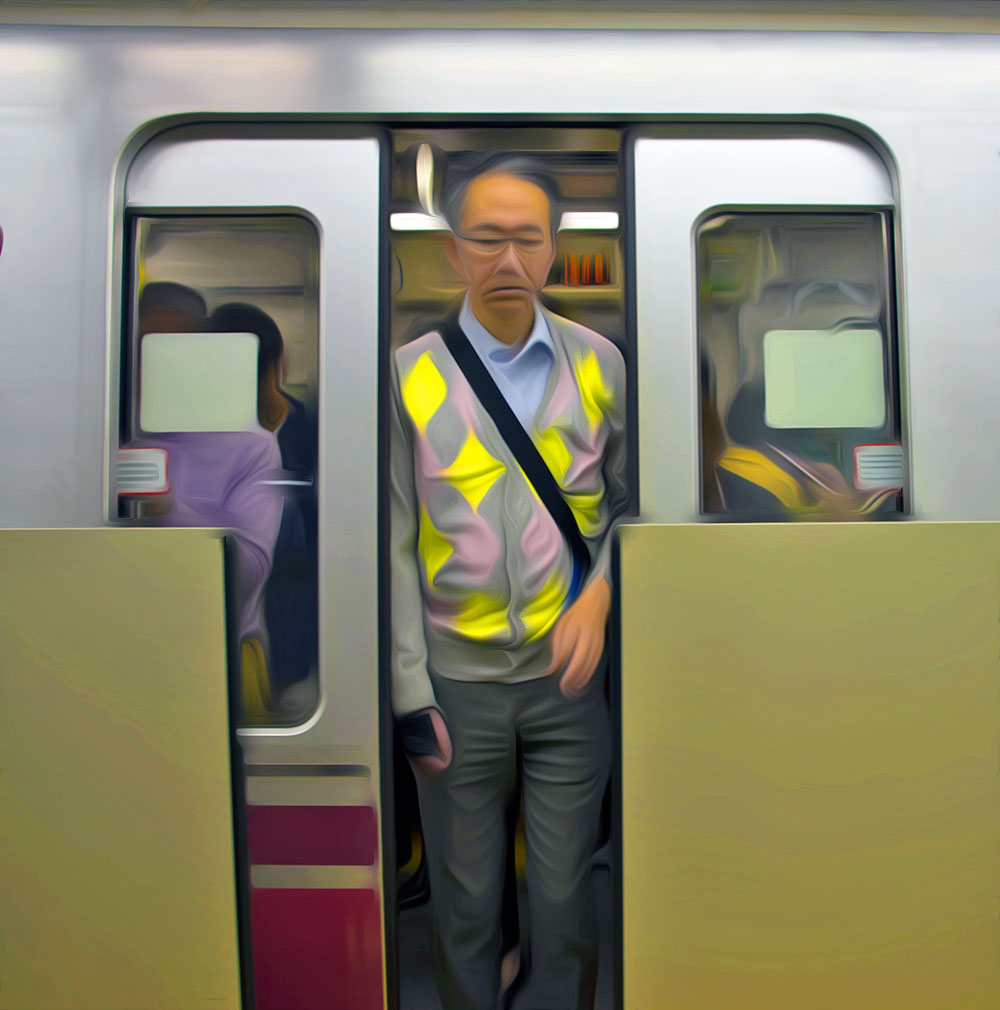 A painting on a building along Market, St and the east end of UN plaza. All kinds of people will be here everyday. The first time I came from around a corner, saw the building, the “local business men” lining the sidewalk and then the painted part of the building was bright in the sunlight. I got into a conversation with the father of the artist who painted it, I wanted to know how she did it, he thought I was judging the it.

I can understand feeling alone in a group, . . .

even a group united with a common cause..
Do you believe the world can be a better place?

A photograph is that small moment connecting the past and the future. Does it make any difference in the photograph if that moment of exposure time was longer or shorter? Well not really, Its not a matter of collecting more information but the camera adjustments controls the light which comes into the lens to record an image which can be sensed by the human eye and the exposure time may be adjusted to get the image which is seeable by the eye. . Do we see in the photograph what we see when we see it.? or Do we see what we think we see.

The light we are seeing from outer space now is very old, compare it to our day light which we are seeing about 8 minutes old or seeing the face of someone standing in your face while experiencing an adrenaline rush.

Why is light from space so dim, is this the best our eyes can do? Is the problem the light is so dim or our eye cannt see it.

Light travels through the Universe in waves but interacts as a particle. Light is photons which behave as waves when traveling and as particles when interacting with some thing which detects them, such as the human eye. Traveling through space the waves stretch out and get dimmer.

Imagine a powerful star very very far away from Earth and in between a very large number of planets and stars, galaxies even, with each one reflecting, i. e., blocking parts of or all of the light from the far star as it travels towards Earth. As scientists get the pieces it must be like a jig saw puzzle which you assemble over long periods of time.

Because Earth will reflect/absorb the light from the far away star any planet or light detector on the other side of Earth will not experience (detect) that light and whatever information it carries.

When light interacts with some solid thing which does not let the light pass through it may absorb and reflect, sending the light in another direction . . . on another path somewhere else in the Universe. Or perhaps the camera catches the soul of the photo, imprisoning it forever or until the image, like love, just fades aways.

All this time perhaps the wave, the part which moves through space until it is detected, is carrying the image information until it reaches an interaction and converts to particles , maybe randomly scattering an image here or there.

The camera is a tool to detect and record this image information and put it on film and paper or make a digital image which needs a screen to print on. We could make a camera to “see” the history of the whole Universe as it passes us by as it becomes too dim to see.

Maybe light is a bunch of images searching for a medium (light detector), just a living camera in itself, and the Universe is full of “latent images” embedded in light, just waiting for an opportunity to “bang into something ” and print itself out.

Alameda Creek Trail runs along Paseo Padre from Thornton to Decoto Road. Just above Isherwood, on the Oakland side, I don’t know the story, I read it long ago, I believe a death of a young female. For many years some one or some people always put In Memory flowers there.

Perhaps there is no end to the Universe, the light, after so far going out—if light would have such a choice?—has stretched so thin, it has dimmed so much, here is not enough light for the human eye to see. I guess that would be “dark matter,” —Not really a quality of the matter but an absence of light. Make’s you wonder .“What the hell is light?”

Myanmar has faced many political difficulties during the past years. Here are efforts of, perhaps immigrants, to improve the lives of others.

Brother/sister faces in a window, Cambridge, 1971., somewhere down Magazine Street from Central Square., That’s over fifty years ago,

I wear the red vest walking almost every day, I wear vests because I like to have the pockets.

Oribe chawan posing for a snapshot

If I get there too early the sun is not low enough to light the face. and I wonder how many people actually reflect thoughtfully on the things they say they believe in.